Everyone in the blog-o-sphere seems to be posting pictures of crocuses and saying that spring is on its way. Well here in Calgary old man winter is exerting his dominance again - more snow and no signs of spring. We had some warm-ish weather for a few days but it was really just a teaser. 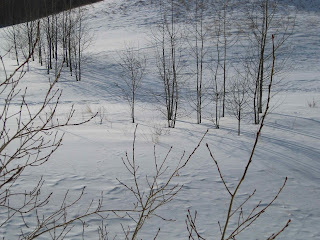 The time change was a bit of a pain in the arse but at least now there is sunlight when I leave work (always a bonus) and the cat still thinks that the time hasn't changed so she doesn't wake me up before the alarm (definitely a bonus).

The cats both have dental work scheduled in two weeks - that will be painfully expensive (I figure $900-1000 per cat) but it is necessary - they will both need extractions. I'm glad that it is soon because then it will be over with. I'm having a fair amount of anxiety about the process. I'm just thankful that we have the money right now - though redoing the flooring will be delayed as will the spinning wheel. It is just as well with the spinning wheel because I seriously don't have the time. In terms of yarn money... well I've got some nice stuff in a box beside me that I want to use before I buy more - which is hard now that I'm looking on etsy and reading even more blogs - the list on the side is out of date.

I'm still a bit sick - mainly just coughing during the night and blowing my nose more than often during the day. And so far Cory isn't sick... (crosses fingers that it stays that way).

I took a break from seaming the mitered square blanket and knit up this little guy. 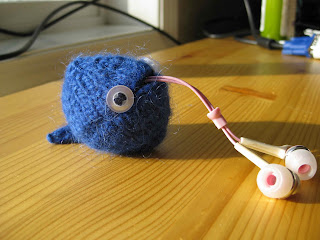 The pattern is a free pattern - Moby Dick (second one is a ravelry link)by Brenda Burrell (ravelry link) of Artemis Adornments. Quick, easy and kinda cute. Mine has a bit of a pointy head, not sure why - but with earbuds coming out his mouth I think he looks great.

Well, our snow has mostly melted. But I am a few degrees latitude south of you. :)

My question is... do you save the teeth? Ewwww, please don't say yes!

Wow--snow! I thought MY day was cold! The whale head-phone thing is adorable! (Uhm, I read ahead...too bad it ended up a cat toy!)