I'm working on decreasing my swearing seeing as in a month or so I'll be working with kids between the ages of 3 and 4. One of my labmates has non-swear word swearing down to an art... His most frequent expletive lately has been "son of a bee sting".

Anyway, what am I complaining about? It appears that I've given myself a repetitive strain injury from knitting. I'm hoping that it was because I was knitting with metal double pointed needles and not knitting in general. If metal dpns are the culprit it doesn't mean I'll give up on the second straight laced sock but it does mean that I'll take it very slowly.

In the meantime I'm enforcing a 1 week (minimum) no knitting policy. I stopped around 7pm yesterday and today I thought about knitting an irrational amount of time - more than normal during working hours. This is going to be a long week. I figure after a week I'll assess how painful my wrists hurt during the day and when I get home from work. I worked on the computer for a few hours today and quickly had a pair of sore wrists. At least today it feels more like a general soreness than a throb. And there is no tingling in my fingers - which I hear is a good sign. There has only been pain for the past week - so hopefully it isn't too bad or too aggravated.

To occupy my time I've started another book and am reading it at home in addition to reading it on the bus (my normal leisure reading time). Yesterday I read Buffy the Vampire Slayer Season 8: The Long Way Home and Buffy the Vampire Slayer Season 8: No Future for You - any Buffy fans should read these (and the other 2 books of season 8, and the upcoming season 9 I bet). I've read the first three omnibus volumes (volume 1 and volume 2 and volume 3) But as I found out, Joss Whedon wasn't as involved (or involved at all) and it shows. These season 8 ones were amazing. Side note from the book stuff - who else is excited about Joss Whedon's latest The Dollhouse?
Today I started Eldest (second in the Inheritance Cycle). So far so good.
And I've decided to sign up for the Feelin' Chunky: Chunkster Challenge 2009 in the category of Do These Books Make my Butt Look Big? This is a commitment to read a minimum of 3-5 books that are 450 pages or longer by November 15, 2009. I don't know that I could do 6 (Mor-book-ly Obese) but not one to resist a challenge I figure I can read more than 2 (The Chubby Chunkster) and I don't want to have to name the books (Too Big To Ignore Anymore). I'm don't think Eldest will count - I think the challenge starts Feb 1 - but in addition I don't know if Brisingr will count because the Twilight books won't count. But even if it won't count - there are plenty of 450+ page books that are on the shelves waiting to be read.
Oh and look at the awesome button they have - it is almost reason enough. 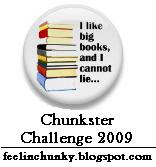 That's a shame about the wrists, but a good idea to take a break.

And the book challenge looks good too... I might just hop over and have a look:)

So sorry about your wrists! Have you tried any excersises or stretches for them? Maybe after your week of rest? I have found that when my fingers start going numb, doing push-ups really helps. I don't know why, so I'm not pushing it as a miracle cure. Maybe it has to do with working other muscles to balance your workout? That certainly sounds good - let's say that. :)
And I love the book challenge! I'm going to go check it out right now!

On Samurai Knitter's blog you were asking about 00 and smaller needles. I have two of the Susan Bates sock sets that have five each of sizes 1, 0, 00 and 000. They were $10 a set when I bought them.

If you can't find them anywhere else, I see Joann.com has them (Susan Bates Silvalume Double Point Knitting Needle Sock Set).

My Lacis needles are very nice. I haven't ordered from Purse Paradise or Knitting Zone, but they have needles down to 8/0 (0000-0000).