Tip #5 for a Successful Thesis & my Prize

Make a list where you can cross things off manually - writing pages of intellectual mumbo-jumbo may not give you a sufficiently satisfactory sense of accomplishment but crossing off things on our list does wonders. And be sure to make your list detailed (so there are more times you can cross things off) and don't be afraid to add things to the list as you go - even if they are already accomplished and you therefore get to strike them off right away ;o)

Awhile back I won the Happy (un)Birthday contest over on Fuzzy Mitten. I got to choose the stuffed animal out of a wonderful selection and I chose a bunny named Zoe (and I found out that the name matched that of one of my kitties after I chose the toy). June 7th Zoe arrived in the mail and I've only just managed to get the pictures off of my camera. The toy is extremely well made Barbara! And for the rest of you, some pictures with a little commentary: 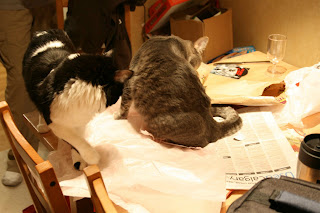 The packaging was a hit with the cats... as was the tissue paper for several days. 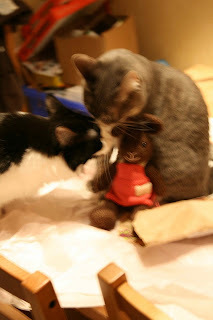 The bunny was inspected by both cats prior to release in the house. 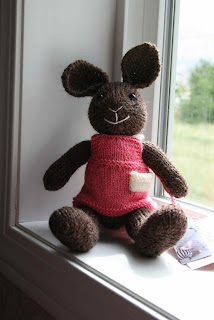 This is Zoe - enjoying some of the little sunshine we had earlier this month. It seemed like it rained for 90% of the past two weeks. Now we have sun though so I'm happy. 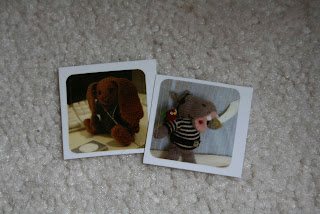 Zoe came bearing gifts of her own. In her pocket there were two stickers - they have images of other toys that Barbara has made. I got a sticker with the pirate hippo and the electronic savy bunny. I haven't decided where I'm going to stick them but it is going t be good. 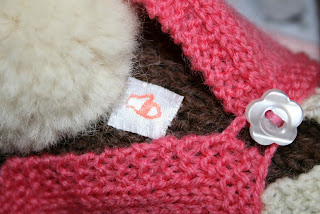 And on a final note, a somewhat illicit picture of Zoe's back side... There is a little tag with a little mitten on it. I just wanted to share the details that Barbara puts into her creations. Something that many of us don't see on her blog. Especially those of us who just buy the patterns and not the ready-made toys. Speaking of the patterns, they kick ass. She has a free one out there too Fuzzy Lamb Knitting Pattern that is as well written as her other patterns.

Email ThisBlogThis!Share to TwitterShare to FacebookShare to Pinterest
Labels: Thesis

Sounds like you're working hard on your thesis. I wish I could have brought you on my weekend away - you sound like you could use a little R & R. Anthing planned for when you finish?
Your cats seem just like my kids - the best part of any present is often the packaging!