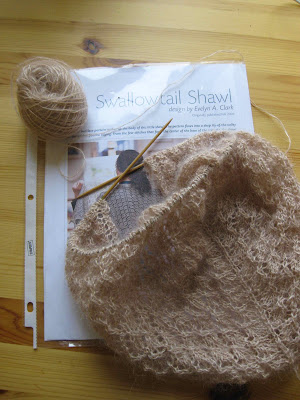 I had, somehow forgotten how much I love lace... my head had been turned by the allure of sock knitting. But the yarn called my name and I cast on the Swallowtail shawl by Evelyn Clark... It was like reconnecting with an old friend. 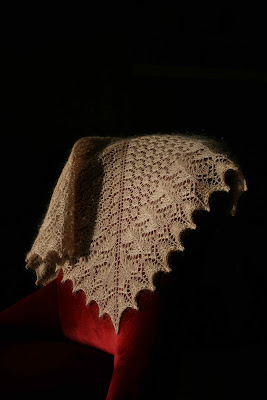 I cast on at my parents place in Kelowna - April 29th and took it off the blocking wires less than an hour ago. I suppose that is one good thing about the horribly dry air in Calgary - knitting dries really fast. It took about 345 yards of Louet Kidlin lace weight, and was knit on 2.5 (3 mm) needles. 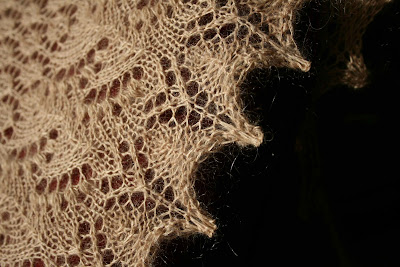 The pattern was wonderful (and free because I downloaded the limited edition ebook during the appropriate time period - though I think I also have the correct issue of the magazine) - my only concern/warning would be against learning nupps on a yarn that contains linen, but for me, in the end, the nupps were fine and completely worth the effort.
Posted by Catie at 20:01

It's beautiful, but really - lace is your first love? Maybe I haven't given it enough of a chance, and you do end up with something unbelievable at the end. Maybe I'm doing it wrong? I'm slogging through lace socks and had to take a break because it was driving me crazy.
And advice (or can you just knit my lace for me?)?
:)

it's just lovely. So very lovely. I love that photo of it draped over the chair.