Book Review: Too Far From Home 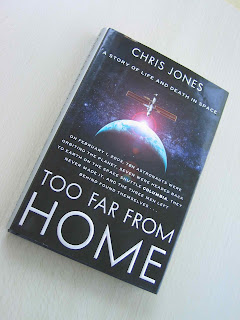 I recently read an interesting book that I thought I'd share with you. I bought it as a Christmas present for Cory this past year but I am the one who has read and enjoyed it. Too Far From Home: A Story of Life and Death in Space, by Chris Jones. The byline on the front of the book sums it up pretty well

On February 1, 2003, ten astronauts were orbiting the planet. Seven were headed back to Earth on the space shuttle Columbia. They never made it. And the three men left behind found themselves... Too Far From Home.

The book is somewhat dry (according to Cory) but I loved the book. It talks mainly about the astronauts, how they felt, how they coped with not knowing when they would return to Earth, how their wives felt... It talks about their histories: how/why they became astronauts, in some cases, how they met their wives, what they are doing now that they are back on Earth. I'm not fascinated with space, space travel, or stars but I loved this book because it was about people, and coping with the unknown.

I learned about this book via a CBC podcast: Quirks and Quarks. I think it is like the US's NPR, but perhaps a bit more scientific (at least more scientific than the pieces of NPR that I've heard). Quirks and Quarks gets leading scientists to talk about their research in an understandable and interesting way - Harvard, McGill, University of Calgary... People who are big names in their fields. People who recently published in the leading scientific journals. There are a lot of segments on space because the host, Bob McDonald, is very interested in the topic, as are a lot of the listeners I suppose. It is available from the website I linked to and via iTunes and I recommend it. One of the next books on my "to read" list is The World Without Us - which I also learned about from this podcast. I'll try to remember to let you know how I like it.

Now I must return to studying, my defense is on Friday! eeeeeee! so close.
Posted by Catie at 11:10