I know I've been sadly lacking in the "pictures of my knitting" department. I will make up for it all in one big post. I could space it all out but I don't know if I'll have time in the near future to do another post with pictures, and I don't know if I'll remember to post later. So I'll just trust that you will read my witty posts (ha!) without pictures later on. We'll start with the old stuff and move to the new stuff.

First up is a picture of my finished Mystery Stole 3. I took a picture during blocking but forgot to get a picture before I gave it to my mom. 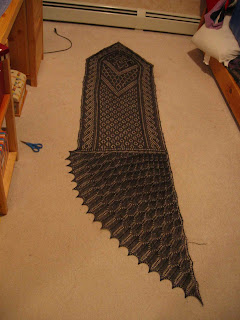 And this is a picture of a Wonton I made for a friend's cat. I love seeing things I made be well loved, and if the recipient is a cat, well they don't lie to make you feel good about a project. I can safely say that Dixun loves his wonton. 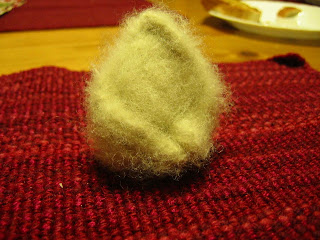 A while back, though not more than a month, I finished the Practice Makes Perfect Scarf found in Inspired Cable Knits. It is warm and wonderful and knit in Berroco Ultra Alpaca (Lavender, 3 skeins). I really liked the pattern too, and have several projects from this book on my mental queue. 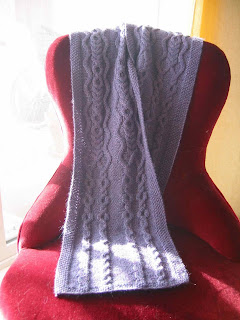 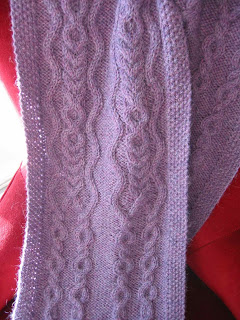 Awhile ago someone was asking us to post pictures of where we knit. Well I sometimes knit on the chair that was seen modeling my scarf. The kicker is that my great-grandmother used to knit on that same chair (as did my mom). It has been reupholstered since then. I love it almost as much as our cats do (which says a lot, it is red velvet, you can imagine how much they like it). Here is a better photo. I love the history associated with the chair. 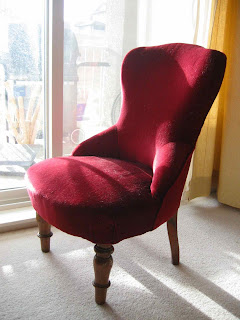 And finally, my current go-to project, a Mitered Squares Blanket a la Mason Dixon Knitting. I am knitting it in a washable yarn that is cost effective. It is Patons Decor - 75% Acrylic, 25% Wool. After the alpaca scarf it was a bit hard to go to the acrylic. But I know that I will need to wash this thing and so wool was out. And good cotton (like they use for the sample in the book) was out due to costs. Perhaps someday when we can afford it I will knit it again with a more expensive yarn, if I am crazy enough to deal with all those ends! I am approximately 30% done the blocks. Then there is the sewing up and the border. But so far I love how it is coming along. 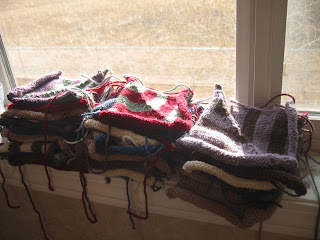 And on a final note, do your cats sleep like this? (by the way Amy, it reminds me of that picture you recently posted of Cave Troll) 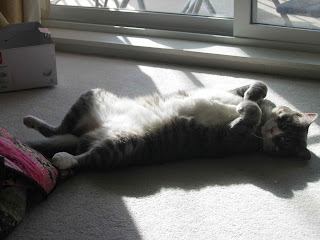 Beautiful projects Catie! I might do mystery stole next time it's on. Did you enjoy it?

And the chair - that's a wonderful story, with the connections - and the sun!